It is often asked that “If there is a God, why does He let natural disaster like the Tsunami happen or is this Divine Punishment?”

One may further ask “Why does God allow suffering”? the fact is that God has made natural laws which effect this world, for instance, cause and effect, action and reaction. The majority of suffering is due to the reaction to some action, but God can intervene and prevent the effect, the reaction. But as suffering is also a sort of trial for testing mankind on how they react; therefore, if we remain steadfast and put our full trust in God then we will get closer to God. On the other hand, if we curse and blame God for our loss, then we have lost this trial and moved further away from God. So if God took away suffering, then He would take away our ability to develop and grow. In this way, some natural disasters must happen and God will not prevent them.

Natural disasters have been occurring throughout the passage of time. The result of these natural disasters can cause some benefit or some harm. Sometimes they lead to adversity, scarcity, hardship and loss and sometimes a life of ease and abundance. God will choose to protect us from the effects of these natural disasters or allow them to continue as part of His law of cause and effect. Normally, God will not intervene and see what our reaction is. More often than not, man will turn to God at times of needs and despair. It is only when mankind starts to move far away from God that God will consider intervening. At that time when a particular people has moved far away from God, God will send His Prophet to them to guide them back to the right path. If those people choose to reject the message of their prophet and continue in their evil ways, then God may choose to warn them through His punishment or destroy them all together and allow the good people to develop. This has what has been mentioned in the Holy Books.

The Holy Qur’an relates:- Never did We send a Prophet to any town but We seized the people thereof with adversity and suffering, that they might become humble. Then We changed (their evil condition) into good until they grew (in affluence and number) and said, `Suffering and happiness betided our fathers (also).’ (So if it befalls us, it matters not)

We read in the Holy Books how God sent Prophets to mankind to teach them about God and the importance of following God’s way. But all Prophets are also Warners and they explain to mankind that if they do not turn to God then they may be punished. The punishment of Allah is usually some form of natural disaster i.e.

The Holy Qur’an relates about Noah and the flood:- “The people of Noah rejected the Truth before them; they rejected Our servant and said: A madman spurned by our gods. He called on his Lord: I am overcome; do Thou avenge me. Thereupon, We opened the gates of heaven (the skies) with water pouring down; and We caused the earth to burst forth with springs, so the two waters met for a purpose, which had been pre-determined”. [54:10-13]

“The tribe of ‘Ad also rejected the Truth. How terrible then was My chastisement and My warning!

We sent against them a furious wind, for a long period of time of un-ending ill-luck, which tore people away as though they were trunks of uprooted and hollow palm trees”.[54:19-21]

Or by volcanic eruptions like the people of Lot

“Then the promised chastisement seized them (the people of the Lot) at sunrise. We turned
the city upside down and We rained upon them stones of clay.” [15:74-75]

But mankind generally dismisses these punishments as stories of old, so as the question asks, are we now facing natural disasters or Divine punishment? So how can we distinguish what is a natural disaster and what a Divine punishment is? What were the Tsunami or the earthquake in Pakistan or Hurricane Katrina in America? The most important feature of a Divine punishment is that it has been foretold by a Prophet beforehand. The Prophet has given his message to the people; they have rejected it and him and have continued to carry on in their ways, distancing themselves from God until God finally warns them with His punishment or even destroys them. So have we been warned?

It is believed that we are now in the latter days; The Holy Bible relates about the signs of the Latter Days in Matthew 24, verses 6-7:

“And ye shall hear of wars and rumours of wars; see that ye be not troubled; for all these things must come to pass, but the end is not yet. For nation shall rise against nation, and kingdom against kingdom; and there shall be famines, and pestilences and earthquakes in divers places.”

Over the last hundred years we have seen mighty World Wars, famines, pestilences like Aids and earthquakes all over the world. It is interesting to note that in the past 1,100 years there have been eleven massive earthquakes (death toll exceeding 50,000 people), yet since 1905 thirteen such earthquakes have occurred! Furthermore in the last hundred years wars have spread across 35 countries where ninety five million people have lost their lives! In this new millennium we have has so far major disasters like the Iran earthquake, the Tsunami, the Pakistan earthquake and of course the havoc that was created by Hurricane Katrina in the USA.

So if this is the latter days and we are experiencing Divine punishments then where is the Warner? We believe that the Holy Prophet 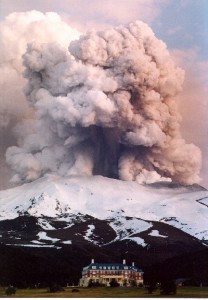 Muhammad, may peace and blessings be upon him, came for the whole of mankind. He informed mankind of God’s message which is found in the Holy Qur’an and he also warned us about God’s punishment if we did not follow that message. He also informed us that in the latter days the Promised Messiah will come (also found in the Holy Bible). Hazrat Mirza Ghulam Ahmad, may peace be upon him, claimed to be the Promised Messiah and he came and started his movement in 1889 and sadly passed away in 1908. His message was to re-emphasis the Holy Prophet Muhammad, may peace and blessings be upon him, and the teachings of the Holy Qur’an. Sadly, mankind has not paid heed to this message and have moved further and further away from God, therefore we understand that these natural disasters are in fact Divine punishments warning mankind that if they do not change their present course then God will bring about their destruction and allow His believers to develop and prosper. As this should also be noted that when there is a Divine Punishment then God will not allow it to destroy His believers, as we see in the examples above, that the Prophets and their followers sent to the people of Noah, Ad and Lot were saved whilst the disbelievers were destroyed.

So we believe that it is now up to mankind to stop their evil ways and turn to following God’s way, if they do that then the Divine Punishment can be prevented. But if they continue in their ways, then these natural disasters will continue and man will most probably destroy itself in the next world war.

Next Topic  Service to Humanity