The Concept of brotherhood in Islam.

It is often stated that “Religions are the cause of many of today’s problem all vying against each other to proclaim they are the only universal religion for mankind. They do not bring about peace and unity but hate and disunity!” 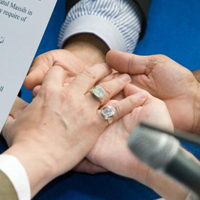 Many of today’s problems derive from the fact that the world in which we live is rapidly becoming one world. With modern technology, communication and transport, mankind is no longer isolated from each other; instead mankind out of necessity must learn to live close together in intimate contact with each other. In other words, they must become a true brotherhood. This requires many adjustments.

First of all mankind needs some sort of rules of conduct to help them interact with each other. Since all mankind desires peace, then the only real way to achieve that is through religion. Religion is not the cause of many of today’s problems; it is the misuse of religion.

Religion is a divine system of beliefs, acts of worship, and rules of conduct to enable human beings to achieve nearness to Allah and to lead a peaceful life.

But a faith, if it is to fulfil man’s needs of today, must, therefore, transcend tribal, national, racial and cultural limits, and must speak to men at a universal level; This is achieved by Islam. The Holy Quran opens with the verse:-

All praise belongs to Allah, Lord of all the worlds. (Ch. 1: verse2)

This presents the reader with a unified concept of humanity and of the universe. The message of Islam is not confined to any section of mankind; instead it embraces the whole of mankind and the entire universe. As the Holy Quran relates“

Say; ‘O mankind! truly 1 am a Messenger to you all from Allah to Whom belongs the Kingdom of the heavens and the earth. There is no God, but He. He gives life and He causes death…” (Ch. 7: verse159)

The advent of the Holy Prophet (may peace and blessings of Allah be upon him) is described in the Holy Quran as:“

Furthermore, Islam proclaims to be for the universal brotherhood of man.

“And hold fast, all together, by the rope of Allah and be not divided; and remember the favour of Allah which He bestowed upon you when you were enemies and He united your hearts in love, so that by His grace you became as brothers; and you were on the brink of a pit off re and He saved you from it. Thus does Allah explain to you His commandments that you may be guided.”” (Ch. 3: verse 104)

“And among His signs are the creation of the heavens and earth, and the diversity of your tongues and colours. In that surely are Signs for those who possess knowledge.”(Ch. 30: verse 23)

But it proclaims that the standard that we should judge one another, should be that same standard that God judges us by; not by the position, wealth or colour but by the purity and righteousness of a person’s life. The Holy Quran relates:

“O, mankind, We have created you from a male and a female; and We have made you into tribes and sub-tribes that you may recognise one another. Verily, the most honourable among you, in the sight of Allah, is he who is most righteous among you Surely Allah is All-Knowing, All-Aware.”(Ch 49:14)

Islam makes no distinction or privilege, whether pertaining to colour, race or caste or derived from family, rank, or wealth. Instead it makes all mankind one great brotherhood, and exhorts all of us to seek and win the pleasure of God through the righteousness and beneficence of our conduct towards each other.

This has been nicely explained by Hazrat Mirza Ghulam Ahmad, founder of the Ahmadiyya Muslim Community who has stated:

The mission for which I have been appointed is to remove that growing gap in the relationship between God and His creation and replace it once again with the relationship of love and sincerity; and by allowing the truth to manifest itself, cause religious wars and discord to end and thus lay the foundations for peace; and disclose such religious truths as had become hidden from the eyes of the world; and display an example of that spirituality that had become buried under the darkness of the pleasures of the self; and by my condition rather than by word of mouth, I should tell and explain God’s powers that enter man and re-emerge as meditation or prayer” (Lecture Lahore, Page 47)

Therefore the only real answer to resolve many of today’s problems is to have one universal religion for all mankind and Islam claims to be that religion. Through following the teachings of Islam it will enable man to recognise his God and be able to interact with God’s creation and thus find the peace that he desires.

Previous Topic Is Suicide Allowed in Islam?
Next Topic  Honour Killings of Female...