So far we have studied various codes of conduct which promote good social relations and fulfil the general requirements of an Islamic society. Now we come to some restrictive regulations, the purpose of which is to keep certain vices from corrupting the society. These regulations relate to certain foods and drinks, gambling and the taking of usury.

There are four things the eating of which is forbidden to a Muslim. These are:

that which dies of itself (i.e. naturally)
blood
pork
that which has been slaughtered in the name of anyone other than God.

Animals that die of themselves are not fit to be eaten because they may be diseased or rotting. Eating of blood is prohibited on the grounds that it is a sign of barbarity and primitiveness. Pork is forbidden on the grounds that its meat carries many diseases. Eating of the last mentioned item is prohibited on spiritual grounds. It is not proper for a Muslim to be eating something on which the name of someone other than God has been invoked. At the time of the Holy Prophet Muhammad, may peace and blessings of Allah be upon him, and in some places even today, it was common practice to prepare food as offering to various gods. Muslims are forbidden to eat such food.

Except for the four things mentioned above, Muslims are allowed to eat everything that is clean, pure and agreeable.

Drinking of intoxicating liquors was prevalent among the Arabs at the time of the Holy Prophet Muhammad, may peace and blessings of Allah be upon him. The prohibition against their consumption came gradually. First the Muslims were told by God that the intoxicating drinks contain more harm than good. Then they were commanded not to say their prayers if they were intoxicated. Finally, came the commandment to shun this uncleanness altogether. Muslims, therefore, are not permitted to consume alcoholic drinks.

Gambling and other games of chance are also prohibited in Islam. According to the Holy Qur’an, these things carry little good and more harm. A Muslim, therefore, avoids indulging in such activities. Playing lottery and gambling machines are also prohibited under the same principle.

Taking of interest goes against the Islamic principle of charity and is, therefore, prohibited. In the Islamic philosophy, a borrower who is already in hardship should not be expected to repay an additional sum as interest. A lender should only take his original loan back, or better still, forgive it if he can afford to do so. 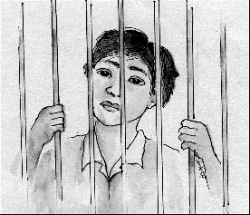 Penal Laws in Islam and Punishments

Besides enjoining voluntary acts of righteousness, Islam contains penal codes to deal with gross violations of social trust. In Islam it is strictly prohibited to violate the life, property or honour of another person. According to the many commandments of the Holy Qur’an and the various traditions of the Holy Prophet Muhammad, may peace and blessings of Allah be upon him, the above three things are made sacred for the Muslims and are not to be violated. The wilful violation of these limits placed in Islam could be punishable by the society.

Selected Sayings
of the Holy Prophet

Allah says: “I treat My servants in accordance with his understanding and expectations of Me. So, let him think of Me as he chooses”
(Bukhari)